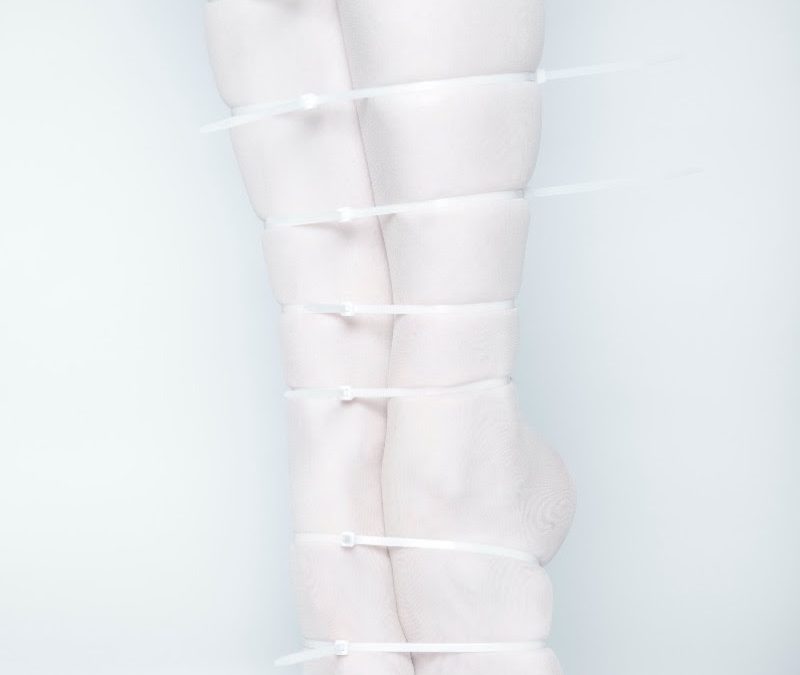 Anni Kinnunen presents a new series of artworks in Helsinki at Gallery Halmetoja. The series was first on display in Oulu’s Galleria Harmaja in September. This new series depicts the external pressures that people face and the pain and damage they cause. A bruise grows into a metaphor of unwanted advances, coercion and restraint. Kinnunen depicts surreal desires and fears, humanity and the subconscious. She questions the idea of inadvertency, showing us acts where the boundary between pain and pleasure can be blurred.

Besides physical sensation, images of pain are also images of consciousness, and not just subconsciousness but also images of deliberate, intentional action and comprehension. Humans’ capacity for inflicting pain on themselves and others is an indisputable but a rarely talked about attribute. The question of whether violence is a part of humanity seems mainly disconcerting. Playing with the feelings and bodies of others is a part of our existence in the same way as understanding our own emotions and sensations through education and experimentation.

These new artworks by Anni Kinnunen are photographs, but visually seeping in two directions. It is impossible to look at them without thinking about performance, the art of action, the gesture, the show. On the other hand, they verge on paintings, an aesthetic surface that tells us stories, making false claims. Kinnunen is not at all a slave to her medium. She seeks the best possible tools of narration for her expression and message, and the ensuing artwork may emerge as a video, an installation or even a sculpture.

The sizes of the photos vary from larger than a human to smaller and more manageable sizes. Large size not only contributes to visibility, but it also breaks the narrative rhythm, almost in a violent manner. It forces the viewer to look as if in a mirror. The person is presented in the same scale as the viewer, who thus identifies with either the victim or the perpetrator.

The visual look of Kinnunen’s new photographs holds similar aesthetics of installation to her previous Japan series. The visible space of the images is reduced and measured to the extreme. The space is almost faded out, but not to the extent to turn the images nonspatial. The motif is not cut out of the background, but it is right where it is. Clinical expression is more effective when it feels real and not detached from reality. Although Kinnunen does manipulate the images, sometimes boldly, she does it with the hand of a painter rather than that of a forger. The events in the images have truly taken place.

This makes the pain more identifiable, the pressure more recognizable and the bruises real. The surgically cool approach of the artworks is combined with the identifiable physical sensation in a way that brings to mind photorealistic painters. However, the difference to a painting is that the photographs challenge us to think whether the images are real. In paintings, these images would be seen as imaginative and surreal nightmares. As photographs, you cannot pass them by without asking the question of what really happened.

Anni Kinnunen’s first solo exhibition was held in 2005 at the Northern Photographic Centre in Oulu. Her works have been on display in several international exhibitions in such countries as Germany, Japan and the USA. In Finland, her art has been included in several prestigious exhibitions such as The Youth in Helsinki’s Kunsthalle (2009), The Mänttä Art Festival (2013, 2018) and the Snowball Effect – North-Finnish Art Biennale (2012, 2014, 2016). Kinnunen has published two books of her photography (2007, 2013) and her works have been acquired by the Oulu Art Museum, City of Tampere and the Finnish State Art Commission.